About the Garrick Club

The Garrick Club is instituted for the general patronage of drama; for the purpose of combining the use of a Club, on economic principles, with the advantages of a literary society; for bringing together supporters of drama; and for the formation of a theatrical library, with works on costume.

The Garrick Club is situated in the heart of London’s West End and Theatreland, in Old Covent Garden. The nearest underground station is Leicester Square and Covent Garden (Piccadilly/Northern lines).

The Garrick was founded in 1831 by a group of literary gentlemen under the patronage of the King’s brother, the egalitarian Duke of Sussex. They announced that the Club would be a place where ‘actors and men of refinement and education might meet on equal terms’, where ‘patrons of the drama and its professors were to be brought together’, and where ‘easy intercourse was to be promoted between artists and patrons’.

The Club was named after the great eighteenth century actor David Garrick. Attracted by the combination of the traditions of the eighteenth century literary society with the advantages of a well-run dining and social club, the first members of the Garrick were a sophisticated and cosmopolitan group that included twenty-four peers of the realm as well as writers, actors, musicians and publishers.

Many of the great literary personalities of the nineteenth century were members of the Garrick, and the Club was the scene of a famous quarrel between perhaps the two greatest – Dickens and Thackeray. Edmund Yates, a friend of Dickens, published remarks on Thackeray that were offensive and could only have been heard in the Club. Yates was peevishly championed by Dickens and the disaffection between him and Thackeray lasted until just before the latter’s death. Other members of the Club in the nineteenth century included writers such as Trollope, Captain Marryat, Meredith, JM Barrie, Pinero and WS Gilbert, actors such as Macready, Charles Kemble, Charles Mathews, Irving, Tree and Forbes-Robertson, composers such as Elgar and Sullivan and artists such as Millais, Leighton and Rossetti.

Today the Club has around 1,300 members including many of the most distinguished actors and men of letters in England. The original assurance of the committee, “that it would be better that ten unobjectionable men should be excluded than one terrible bore should be admitted”, ensures that the lively atmosphere for which the Club was so well-known in the nineteenth century continues to invigorate members of the Club in the twenty-first century.

The Club possesses an important theatrical library that includes many manuscripts and documents, a valuable collection of play-texts and tens of thousands of playbills and theatre programmes. However, the greatest treasure of the Garrick Club is the collection of theatrical paintings and drawings, much the largest and most comprehensive in existence.

The collection, which consists of 1,000 items, was started by the actor Charles Mathews in the early nineteenth century. His 400 paintings and drawings were bought by Robert Durrant in 1835 and given to the Club. The collection continues to grow and portraits of Laurence Olivier and John Gielgud hang alongside those of Henry Irving and David Garrick.

To arrange a guided group tour of the Club (for between 20 and 30 people), please contact Sarah Hughes on 020 8291 0304 or e-mail: sarahhughescasting@gmail.com. To download a copy of the tour information, please click on this link - Garrick Tour. 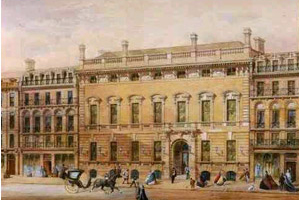 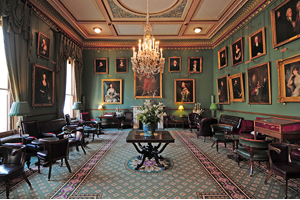 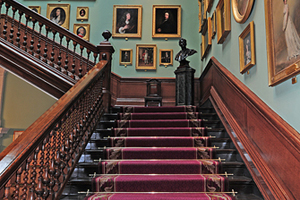